Mole and cicada populations are naturally intertwined. As natural predators of cicadas, moles will migrate anywhere there is a significant increase in cicadas. The yearly numbers tend to be stable, but recent events have thrown a wrench in the cycle. A huge rise in cicadas is driving up mole populations all across the eastern US, making life difficult for both cicadas and homeowners alike. This presents a new set of challenges for anyone living in Columbus and surrounding areas.

What is causing the rise in cicada populations?

Every 13 to 17 years, an enormous brood of cicadas surfaces from below the earth and are let loose into nearby civilization. Although we can roughly predict this outbreak of cicadas, there is really no way to stop them. There are just too many to be controlled in any effective manner. Leading biology experts say that the populations of animals which prey on cicadas will see significant boosts. This alone will not be enough to stop the wave of cicadas. The swarm is expected to last until next spring, so I’ll briefly cover the things you need to know in order to get you through the year.

Why does this attract so many moles?

Moles are always on the lookout for their next source of food. They mostly feed on insects, worms, and grubs. An increase in any of these populations is likely to trigger a wave of mole activity. Because of the massive cicada swarm, this is exactly the situation we are in. Many eastern American states, including Ohio, are experiencing this rise as well as an increase in mole appearances. For the foreseeable future, the spikes in cicada and mole populations are expected to persist throughout Columbus and the surrounding areas. This means it is essential to know how to handle your mole situation.

How do we stop the moles? 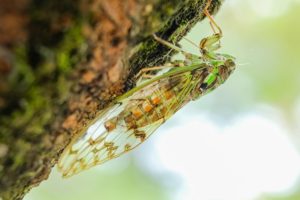 You can’t do much about the cicadas, but you can take steps to remedy any mole problems. The obvious solution is to get rid of the moles’ food source. Considering this is impossible, the best fix is to trap the moles. Do-it-yourself wildlife removal companies want you to think that trapping moles is an easy job. I promise you it isn’t. To trap a mole (and there is usually more than one), you need specialized knowledge. You need to know their behavioral tendencies as well as how to identify the proper time and location for a trap. Furthermore, the traps available to a professional wildlife service such as Buckeye Wildlife Solutions far surpass the quality of those you can buy online. Simply put, mole removal is a job for experienced professionals. If you are having trouble with moles, pick up the phone and dial Buckeye Wildlife Solutions right now at (844) 544-9453.